I had the pleasure of swinging by Wizard World Chicago last weekend.  While I didn't have time to soak up the majority of events the con has to offer, I did get to root around Artist Alley and fill my bag with comics aplenty.  I'm going to spend the next few weeks talking about some of the self published comics I picked up.

One of the things I was looking forward to the most was meeting a certain Mr. Kevin D. Bandt, whom you'll recognized from my previous post as an artist who drew a two page story set to appear in the upcoming Zero's Heroes archive book.  I picked up the four issues of his book, The Carriers, and here's what I thought of them.

I'm a big fan of Kevin's art, which I make no secret of, and it is on full display in these books.  He's been working on this book for many years now, and as you read through the book you can see his art evolve and grow.  The first issue is a little rough around the edges, but there's still a strong sense of style.  By the fourth issue, Kevin's art is sleek and flashy with strong, bold lines and bright, vivid colors.

So, what is The Carriers about?  Here's a striking page from the fourth issue. 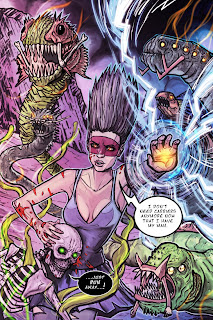 The Carriers is a kind of surreal, punk rock, fantasy epic.  It's a pretty light read, but there's a lot to look at.  The book tells to tale of a group of people called "Carriers" who, for lack of a longer explanation, have magical abilities.  There's an evil queen sucking the life force of her victims, a rebellion trying to overthrow her, and of course, giant monsters and stuff.  The story is ongoing and clearly not finished, so I'm eagerly waiting for the next issue.

The Carriers is for sale at Cuddlefish Comics' store, http://cuddlefish.storenvy.com/

Email ThisBlogThis!Share to TwitterShare to FacebookShare to Pinterest
Labels: Comic Review, The Carriers