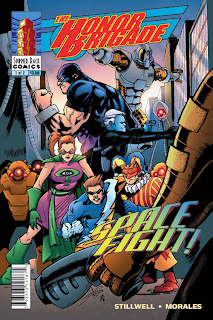 From Spinner Rack Comics comes The Honor Brigade.  I met Tom Stillwell at Wizard World in his home town of Chicago and picked up three issues from him, the first issue of his new Honor Brigade series, as well as two Toy Boy specials.

I have seen Tom's work advertised around the web and on Digital Webbing, so I was not entirely unfamiliar with the books, but I had not read any of them.  I was particularly interested in these three issues because they were drawn by Jethro Morales, who is a fantastic artist.  Jethro drew a couple chapters of our own, The Celestial, and will have a few pages in my upcoming Zero's Heroes book.  So, needless to say, I'm a fan of his work.  And it's clear to see why in these issues because he knocks it out of the park. 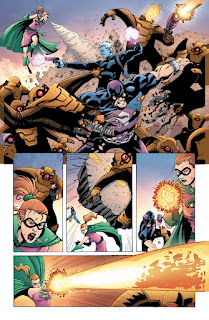 The Honor Brigade is an all ages superhero comic that plays to all the genre tropes and styles very clearly.  These are really good looking comics, extremely well paced and dialoged.  When you read these books, you know exactly what you are getting.  They feel like classic comics, which I would say simultaneously works for and against the book.  This is the kind of comic that could slip under the radar of the average superhero comic fan who's more interested in whatever wacky idea Brian Bendis or Grant Morrison are going to come up with next.  This is unfortunate because these books have  lots of action, adventure, and fun characters. 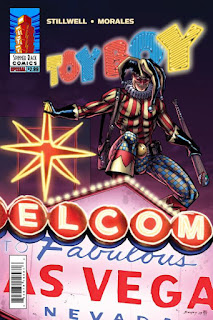 I liked the two Toy Boy specials, partially because of my preference for single issue stories, which Stillwell and Morales handled deftly.  It's clear that Toy Boy is the most interesting character on the Honor Brigade team.  He's a funny, wise cracking, former thief.  The character is slightly more wacky than Spider-man but not as dark as Deadpool.  He falls comfortably between the two classic Marvel characters and it works nicely.

Stillwell is currently publishing The Honor Brigade: Space Fight, which you can purchase from Indy Planet (along with his other books).


You can also read old issues of The Honor Brigade at http://www.honorbrigadecomic.com/
Posted by Aaron at 12:26 PM