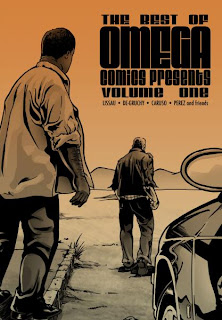 Russell did a good job of selling me a lot of comics.  He's done some work for an anthology called Omega Comics Presents which is put out by Pop! Goes the Icon.  I picked up the Best of Volume One collection, as well as the first issue of Volume Two.  I also bought two mini comics he had done, which were pretty good.

The Omega Comics Presents books were both good looking comics.  I thought the Volume One collection was a little uneven, but it had some entertaining short stories and a slew of talented artists scattered throughout it.  It was an entertaining read, but nothing really jumped out at me save for a few artists. 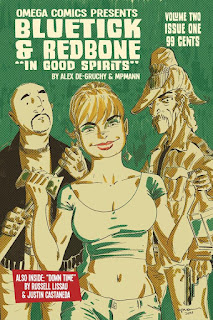 Volume Two, on the other hand, was really fantastic.  This is a really strong issue that stands high above any of the previous stuff, possibly due in part to the coloring.  The lead story, Bluetick and Redbone, is a beautiful comic about a two small town roughnecks who get wrapped up in some criminal doings.  The story, written by Alex De-Gruchy, is paced really well and has a good flow.  The real star of the book is artist, mpMann, who was also one of the stronger aspects of Volume One.  He's got a real loose and playful cartooning style that has a lot of character. 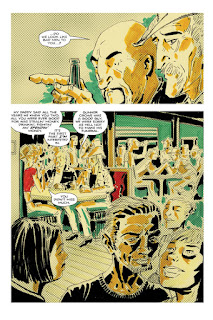 The back up feature in Vol. 02 Issue 01 is written by Russell Lissau and drawn by Justin Castaneda called Down Time.  It's a lighthearted look at a supervillain who looses all his mercenary work after a humiliating defeat at the hands of an old bank security guard.  I always like stories that look at the mundane aspects of being a superhero or supervillain, and this one is good for a laugh.

Russell's two mini comics, One Last Thing and Daily Grind are both illustrated by mpMann and are also both good reads.  They are both short stories that focus on a small moment in a character's life in the middle of a big situation.  They play very well.  One Last Thing is a western interpretation of the music of Chris Mills, where as Daily Grind is the existential introspection of a middle aged man who hates his life.

I've never been too huge on mini comics, mostly for the same reason I have eased off of regular monthly comics, but the personal aspect of meeting a comic creator and buying something from him personally more than make up for it.