I've always found Rogue to be an interesting character.  There was a time, as young fan of the X-Men, when I would have considered her one of my favorite X-Men characters and definitely my favorite female character.  As a young teenage boy, I used to love to draw Rogue, though I don't know if I was ever sure why, other than the obvious fact that she was just cool (I think we all know why now).  Over time I've cooled on the character.  Like all X-Men characters, she's gone though a myriad of changes all in the name of Marvel's ongoing continuity, most of which I have no interest in.

It's impossible to deny Rogue's popularity.  She frequently places high in various lists and rankings, such as IGN's top 25 X-Men, where she places 5th, right behind Wolverine, and is the second highest female on the list.  Kitty Pryde beats out both Rogue and Wolverine for the number 3 spot, but hey, I don't see Weezer singing about Rogue or Wolverine, so there.  She plays a prominent role in various video games, movies, and cartoons.  In short, she is prevalent. 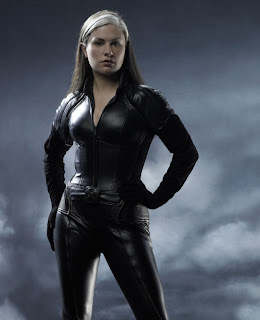 So, what is it about Rogue that makes her so popular?  I think the answer is as obvious as it is complex, but it starts with the simple fact that Rogue is hot sex dripping out of a latex body suit.  Rogue can often get lumped in with the other female characters as an example of sexism in comics, which I think is a little unfair.  I won't try to defend every artistic interpretation of her, but there is a difference between sexy and sexism (I differentiate the two not by the character's costume, physical attributes, or personality but instead by the way the character is framed and posed, which is more a case of an artist being sexist not a character being sexist) .  More importantly though, sex is very foundation of the character, which I think helps to explain her popularity among girls more so than boys.

Rogue, as a character, manages to maintain a very strong appeal to both girls and boys, due in part, I think, to the fact that both genders identify with her on a deep, sexual level.  Rogue is not a sexploitation character, like Psylock, who was a shy, insecure girl with dreams of becoming a warrior that got magically turned into a Japanese sex doll ninja.  That's a character arc, sure, but it's thin and has been used for nothing but visual titillation for the last 20 years.  Rogue's character, though still deeply sexual, is much deeper. 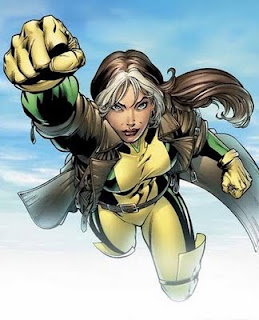 If you'll allow a brief diversion, I should clarify that at the root of the mythos, I believe the X-Men are about sex.  I'm not the first person to say this, Grant Morrison (in)famously wrote New X-Men #118, which was chock full of subliminal sex messages.  The beauty of the X-Men mythos is that the simple metaphor of teenagers turning into mutants is broad enough to cover a diverse amount of deep social or scientific subjects.  The X-men can be about racism, puberty, religion, evolution, generational divide, xenophobia, and so on.  It is the single greatest American Mythology created in the 20th Century, perhaps in all time.

In recent times, The X-Men have come to represent, and in my opinion suffer from an overt responsibility to, homosexuality, as evidenced in Marvel's recent big to do about having a gay marriage.  It's easy to see why the franchise has drifted that direction.  As I just said, the X-Men metaphor effortlessly conforms to the trials and tribulations of young homosexuals in America.  The X-Men have always been progressive, and gays in America is certainly en vogue in the media right now.

But if the X-Men metaphor were solely about homophobia, or racism for that matter, then I don't think the mythos would connect with as many people as it does.  After all, only something like 10% of the population is gay.  Sure, lots of people have opinions on racism and homophobia, and there is no shortage of "White Knights" in America, but the fact is not everybody is a minority, and the X-Men connect deeply with a majority of people.  Everybody, every single person on the planet, whether they be gay or straight, growing up in the racist south in the 20th Century or some kind of inconceivable utopian of tolerance in future, every single human past, present, and future, goes through puberty.

Of course, that is not to say that the metaphor doesn't apply to racism, homophobia, etc.  The fact that it applies to all of them is what makes it so strong.

Rogue's power is that she cannot touch another human being without draining their life force, which seriously injures and can kill the person she's touching.  This also has the added bonus of briefly stealing the powers of another mutant.  Unable to have physical contact, Rogue can be squarely placed in the role of a Succubus or the temptress, but that reading really only appeals to boys, how do girls identify with a Succubus?

An important part of a mutant's origin is the first moment their powers materialize.  Often times it can be a traumatic experience, and it doesn't get much more traumatic than Rogue's.  Her powers first manifested themselves, like all mutants, when she was a young teenager, specifically, when she first kissed her boyfriend, Cody.  As a result of this carnal moment, Cody was left in a permanent coma.  Right there, we see that the foundation of Rogue's character equates sex with guilt. 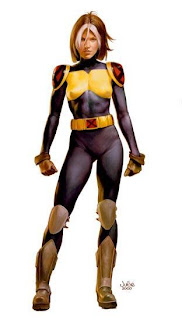 Rogue's character is the embodiment of Puritan Sex.  She is forced to be modest, covering her entire body, lest she accidentally touch (tempt) some poor person and send them to hell.  Modesty is a big issue for young girls growing up, particularly if they come from a religious home (as I suspect the majority of Americans do).  The notion that the way women dress can affect male actions and that they (women) have a moral responsibility not to stimulate sexual desires (outside of marriage, of course) is still prominent today in America, particularly among Mormons.  This is also the mentality that leads to "blaming the victim" in rape cases.

In this way, Rogue shows her rebellious wild streak by defying oppressive societal standards.  Though her mutant powers force her to be modest, she refuses to be a slave to it, flaunting her sexuality by wearing a skin tight body suit.  In this case, Rogue's cheesecake costume is absolutely fundamental to her character.  Rogue looks sexy, she feels sexy, she acts sexy, all in a way that girls identify with.  She wants, maybe even needs, to be admired, because she cannot be touched.

Rogue's sexuality extends beyond the subtext of her mutant powers, it also plays a prominent role in her character traits.  Rogue is not passive, she is aggressive and independent.  Though she can not know the touch of a man, outwardly, she doesn't need the help of one.  She's fun, outgoing, quirky, and intimidating.  She comfortably fills the role of the character that "all girls want to be, and all boys want to be with". 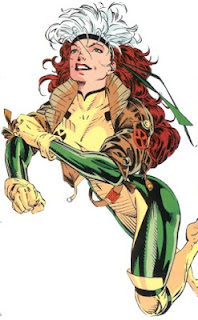 Rogue is the pinnacle of femininity.  Girls want to emulate her strength, independence, and ownership of her sexuality, but still empathize with her loneliness and emotional weakness.  She is simultaneously feminine and masculine, balancing her dainty southern belle persona with her wild "no man can tame me" attitude. Boys see Rogue as the idealistic girlfriend, the kind of girl who is so great and beautiful that it's downright intimidating.  She is the girl at the party that everybody wants to talk to, but most boys are afraid to approach her, and the ones that do can't keep up with her.  She's also kind of crazy and a headcase, which accurately describes every woman I've ever dated (just a little sexism humor for you there...)

Rogue used to literally be a wild mare, possessing the enormous strength and flight of Ms. Marvel, but since her appearance in the movies by Bryan Singer, the character has been depowered in most incarnations.  I've been largely disappointed with this representation of Rogue, as I feel it diminishes the character.  The super strength and flight powers are visual extrapolations of her inner independence. 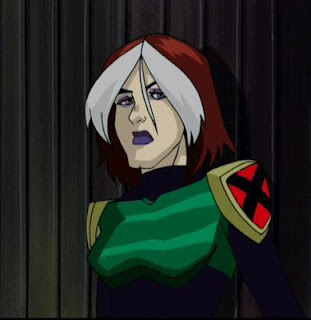 In the movies, Rogue was portrayed as more of an insecure, shy girl, which dramatically shifts her character away from sexually powerful dynamo.  The foundation of guilty sex is there, but she loses a lot of her "envious" traits.  In recent times, Rogue is no longer presented as the fun, powerful, free spirit she used to be, instead she's a naive, stoic, introvert, which seems to be the typical "girl hero" archetype of the last ten years.  Movies meant for girls are full of blank faced sourpusses (Twilight, Hunger Games), as if that's supposed to be what all girls aspire to.  I don't particularly like it, but somebody obviously does.

I'd like to see Rogue return to the outgoing and aggressively fun character she used to be.  I think it's more representative of the X-Men mythology and a prefect example of what is so alluring about the franchise despite having numerous terrible books and movies bearing the logo. 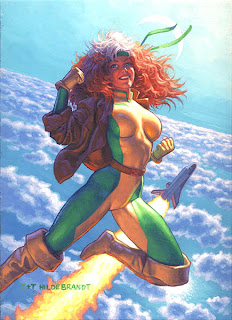