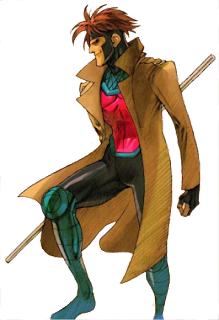 Last week I talked about the sexual subtext in popular X-Men character Rogue; and you can't talk about Rogue without then talking about Gambit.  So, let's take a look at him.  He's one of the few X-men that has held a solo series for more than 12 issues and has appeared in many cartoons and video games.  Gambit as a character never really got a chance in the movie series, largely because his role as a mysterious troublemaker is already taken by the immensely more popular character, Wolverine, which I agreed with.  I initially didn't take to Gambit when he was first introduced in 1990 because he was largely derivative of Wolverine, in that he was a mysterious character with an unknown past.  But over time, Gambit was given a more distinct personality, his powers were developed a bit more, and he began an on again off again relationship with Rogue. 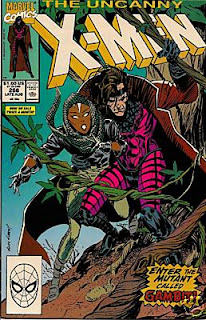 I never cared for the details of Gambit's shady past and was more interested in how he acted in a group dynamic.  The pairing of Gambit and Rogue was a pretty genius idea.  In analyzing Gambit's powers and the sexual subtext within them, we can see how well they compliment each other.  Rogue and Gambit are both strong characters by themselves, but when put together they support themselves as to make stronger characters out of each of them.  In a way, they are the perfect marriage of characters, ironic given that the cyclical nature of serial comics prevents them having a literal marriage.

Gambit has the mutant ability to charge the potential energy within any object, causing it to be unstable and explode.  This is his most visually distinctive trait, though if we look further we will see the subtleties of his powers and character. 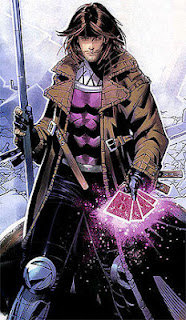 If Rogue is the character that girls want to be and all boys want to be with, then Gambit is the character that all boys want to be and all girls want to be with.  Like Rogue, Gambit has a lot of masculine and feminine qualities.  The most distinctive aspect of Gambit's personality is that he's a real ladykiller.  He's a smooth talking Romeo that all the girls swoon over, and his powers and character reflect that.  Firstly, he's a professional thief.  He steals things for a living, especially girls' hearts.  In this way he's a romanticized boyfriend for young daydreaming girls, both attentive to their needs and ready to whisk them away on a whirlwind adventure.

The other extrapolation of Gambit's sexual powers is his hypnotic charm, which causes people to be susceptible to his suggestions.  This has been explained as saying he has the ability to "charge" the energy in people's brain, causing them to like him.  We can poetically describe this as a love touch.  Tragic then, that the man that can have any girl, falls in love with the one girl he can't touch. 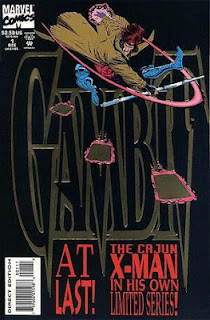 Gambit and Rogue's powers provide the perfect amount of tension for two star crossed lovers:  Rogue, a girl who bathes in attention but longs for a lasting physical connection, and Gambit, the man who has seen the world and sown his oats but is drawn to the girl he cannot control.  They are the pinnacle of the societal ideal of the young, naive, virgin lady, and the worldly, roguish gentleman.

Without Rogue, Gambit's character is kind of aimless, wandering through the X-Men franchise with little purpose or ambition.  Writers will try to trade in on his mysterious back story or his villainous past, but those aspects of the character don't hold much water.  People are drawn to the romanticism and drama of sexual frustration, and Rogue fills that position perfectly. 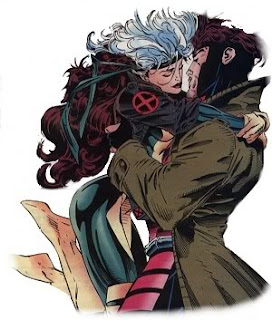