Wizard World Chicago is a behemoth.  The convention has come and gone and I feel like I can finally relax.  I had been to Wizard World Chicago a couple of times in the past (though not as an exhibitor), so I had some sense of what to expect from the show.  Also, I exhibited at C2E2 earlier in the year, which is another big convention also held in Chicago.  Still, WWC is the biggest convention I've exhibited, and there were some key differences from this convention and the conventions previous.

Firstly, WWC is a 4 day con.  So, I was at the con from Thursday through Sunday.  That's a long time which feels even longer behind the table.  Secondly, with the exception of a few hours on Saturday, I was doing this convention completely by myself, so I had very little time to relax and enjoy the con for myself.

Last year, Wizard received a lot of flak for how uncomfortably crowded the floor was.  The layout was like a confusing labyrinth in which you were smashed butt to gut with the people on either side of you.  I had the hardest time finding specific people I was looking for, even using their maps.

This year, they tried to correct their space problems by splitting the show into two levels with the retailers on the second floor and the artist alley on the ground floor.  It's not a bad idea entirely, but there were so many problems which I can only ascribe to poor organization.  I won't go into details because there are other places around the web that do, but I will say that the whole convention seemed like a chore just to get into (even as an exhibitor).  Despite all that, what bothered me the most about this convention was the prices.  The table prices had gone up, which I can deal with, but the general admission prices were nearly doubled from the year previous.  There is no way that convention was worth $70 for a single Saturday admission, and many people were paying hundreds of dollars more to attend convention panels and shake hands with a second rate Spock (sorry Mr. Quinto, but it's true).

The real problem with the immense size of WWC is that the show is basically a giant flea market.  There is no selection process when it comes to exhibiting at Wizard World.  Anybody who pays the table fee get to exhibit, which results in a saturation of people selling the same thing.  It doesn't take an economist to tell you that that is going to spread the profits thinner among the large group of sellers.  The retailer floor was just row after row after row of the same set up of comic long boxes and popular toys.  It's easy to get lost and overwhelmed.

The artist alley felt a little different than it had in years past as well.  Not to sound like an old man pining for the glory days, but I remember walking through the artist alley and stopping at every table to talk to the artists, and most of them were self publishing their own comics.  There were lots of mini comics, and well as self published POD comics (like what I do).  I walked away from the convention with a bag full of comics I couldn't get anywhere else.  These days, it seems like there are less and less self published comics in the artist alley.  There are a number of reasons for this, and they all kind of tie into each other.

Firstly, we are in the middle (or maybe near the end) of a changing comics landscape.  With the easeability of webcomics, people don't *need* to self publish to get their work out there.  Secondly, self publishing is expensive.  Even if you're writing and drawing everything yourself, printing a book costs money.  Digital comics cuts out the costs of printing while still making yourself available to your audience. 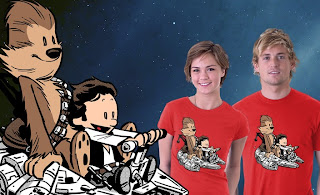 Along with this decline in self publishing, I've noticed an increase in what I shall call "professional fandom".  Marvel and DC have always had a lax policy of not enforcing copyright infringements when it comes to artists selling prints and other merchandise with their corporate owned characters on them.  It may just be my perception, but the Wizard World conventions seem to be overrun by artists selling what, at best, could be considered "legal grey area" merchandise.  This has caused a curious situation wherein the "retailers" have effectively infiltrated the artist alley.  Upon entering the artist alley, you are no longer finding self published original comics and art, instead you are bombarded with even more Spider-man and Doctor Who t-shirts and prints.  The only difference is that in the artist alley, consumers can feel good that they are supporting an artist instead of the big evil corporation that owns all the characters they love and worship. 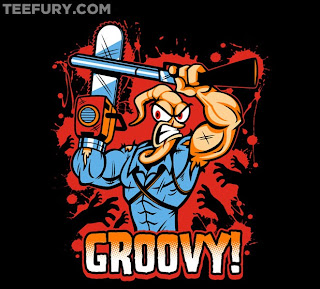 The other trend that I've noticed has become all the rage these past years is the pop culture mash up.  This is when you see a property drawn in the style of another property, or perhaps finding a common word or theme between two properties and combining them.  These kinds of merch may actually be more legal than outright selling a print of Thor and Loki because it could be considered satire and fall under fair use.  Occasionally, they can be clever, but more often than not I find these kinds of mash ups to be lazy, pandering, and at the very worst shallow cash grabs.  But if you're a fan of two different things, what could be better than a single thing that represents both?

I'm not here to play art police or to define what is and isn't "Art" because ultimately I'm going to take the stance that everything is and can be Art with a capital "A", but that doesn't mean that all art is inspired or interesting.

I don't want to sound too sour about the convention.  Yes, it was stressful and frustrating, but I also got to see friends and fans old and new and had some genuinely great experiences, one of which went as follows:

A young couple were walking by my booth casually talking to each other when the man stopped suddenly.  The covers of Science Hero had caught his attention.  He picked an issue off the rack and started flipping through it.  "Science Hero," he said, "this looks interesting."
Before I could even rev up my pitch and try to make the sale, his girlfriend cut me off and said excitedly, "Oh, I've heard of this!"
The young man said, "Really?"
And I said even more surprisingly, "Really?!"
The young girl replied, "Yeah, Sean bought it and said it's great."
This, of course, is great news for me, but the only thing that was running through my mind was, "Oh god!  She's got it confused with a different book.  He's going to buy it thinking it's something else, something more popular and better and great and he's going to be disappointed."
Fortunately for me, the young girl cut off my paranoid internal dialog by saying, "He texted me a picture of it and said to look out for it."
Wow!  I couldn't believe this was happening.  People weren't just liking my book, they were recommending it to their friends.  It was the most flattering thing I could have ever heard.
The guy took the first issue in his hands and cheerfully said, "Well, if it's good enough for Sean then it's good enough for me!"
And then they were off.  I was left with a five dollar bill in my hands and perpetually stunned look on my face.

So, that was a good thing.  I'm still convinced that there was some kind of mistake, but I'll take 'em when I can get 'em (as long as they're in my favor, of course).

I can't say for certain that I will attend Wizard World Chicago next year.  The convention is expensive and time consuming.  I like the more intimate feeling of smaller conventions, especially when the focus more on comics and less on celebrities.