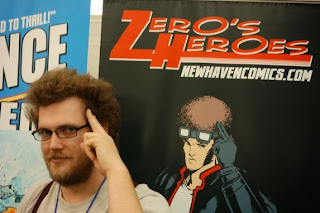 Last weekend I attended Project Comic Con in St. Louis, which was quite a change from Wizard World Chicago, which I attended a month previous.  The biggest difference, of course, is the size of the show.  Whereas WWC is one of the year's largest shows, filling out massive airplane hanger sized rooms in the Rosemont convention center, PCC is a quaint little show in the conference room of a Sheraton hotel.

All other differences stem from this size disparity.  While each show hosts a variety of comic book professionals, at PCC the comic creators are the main attractions and they do not have to take second or third billing behind a bunch of TV and movie actors.  That alone makes it more endearing in my book.

There is also a different attitude in the crowd at the smaller shows.  Both crowds are going to be brimming with love and fervor for comics and other pop culture related art, but at the smaller shows the fandom feels less disconnected and more communal.  When I'm doing a small show, I feel more like I'm a part of the community rather than just another table at a trade show.

As for the PCC show itself, it was really great.  For the record, I did sell more comics at WWC, but the time and financial investment to be there was astronomical compared to PCC.  My table at PCC saw a fair amount of traffic since nearly all attendees could easily walk the entire floor multiple times throughout the day.

One of the things that made Project Comic Com a fantastic experience for me was that I hit the table placement jackpot.  My table was next to fellow local comic creators, Adron and Dan, creators of the comic Loop & Hoodie.  They're a couple of great guys with a fun comic and, being that we're all from the same area, I see them often on the midwest con circuit.  Aside from have familiar neighbors, sitting right across the aisle from me were two famed comic writers, Fabian Nicieza and Joshua Dysart.  Fabian is responsible for writing numerous X-Men comics that I read as a child in the 90's as well as the more contemporary Cable & Deadpool series of the mid 00's.  Joshua is one of the few modern comic writers who's work always interests me.  I don't always agree with his politics, but his work is always deep and meaningful. 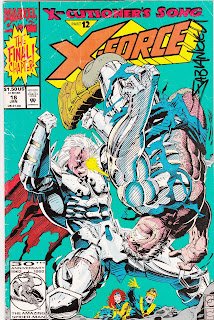 Spending a weekend in such great company boosted my morale in ways that people who make custom dragon toys or cheap chibi caricatures just can't.  I was able to spend some time talking with Fabian and Joshua.  I had Fabian sign my old battered and bruised copy of X-Force 18.  Fabian is very quick witted and enjoys talking.  In many ways, he's like Deadpool come to life, just without all the violence.  When I told him that, as a child, I had probably read this comic more than anything else in my collection, he immediately (lightheartedly) questioned whether or not there had been any adverse psychological side effects.  I decided to continue the bit, explaining that I had read so many comics, it would be impossible to determine specifically which one caused all my brain damage.  He responded with a fictitious fact that 4 out of 5 dentists believe all tooth decay is a result of X-Force comics, to which I could only concede that my dentist would agree with him.  A good time was had by all.

I gave copies of Science Hero and Zero's Heroes to Fabian, who was very complimentary and we chatted about the future of digital comics and the difficulties of getting paid to do what you love.

Joshua was also very complimentary of my comics and bought both issues of Science Hero before I could offer them to him for free (sucker).   We talked about the future of Vertigo and his current work with Valiant.  I also got picked up the second Dark Crystal graphic novel, which he authored.  I am excited to read it and put it on my pile of about a thousand other books waiting to be read.

Not to keep talking about Misters Nicieza and Dysart, but I also attended a convention panel titled Us Make Comic Words.  The panel was a small, intimate discussion with four comic writing professionals, Fabian Nicieza, Joshua Dysart, Scott Lobdell, and Phil Hester.  This was a small panel with a pricey $20 entry fee.  I heard Dysart remark to Nicieza that he didn't have $20 worth of advice to give to aspiring writers.  I don't mind paying fees like this because, it being a smaller con, I feel like my money is specifically going toward comic creators instead of a random actor from a lame popular for this summer only show.

The panel was casual.  Lobdell mediated it, Nicieza talked the most, and Hester gave the most pertinent advice.  I really enjoyed the panel despite the fact that I didn't really learn any new information about making comics.  That sounds like a bad thing, but it really isn't.  I was very gratified to hear the conclusions I had come to on my own or gleaned from other sources completely backed up by working professionals in the industry.  It makes me feel like doing something right.

In the future, I plan to attend smaller shows in favor of the larger, more cost prohibitive shows.
Posted by Aaron at 3:26 PM